Mr. Heller has served since 2007 as our Senior Vice President – Business and Legal Affairs.  Mr. Heller is also General Counsel of Castle Brands Inc., a premium-branded spirits company.  He joined Ladenburg from AOL Latin America.  Previously, Mr. Heller was a Partner in the Corporate Department at Steel Hector & Davis (now Squire Patton Boggs).   Mr. Heller served as a law clerk to the Honorable James Lawrence King of the United States District Court for the Southern District of Florida.  Prior to his clerkship, he was an associate in the Corporate Department at Paul, Weiss in New York.   Mr. Heller received his J.D., cum laude, from Georgetown University Law Center, where he was Articles Editor of the Georgetown Law Journal, and his bachelor of science degree from Northwestern University.  He is admitted to practice law in New York and Florida.  Mr. Heller has been active in a number of civic and charitable pursuits. 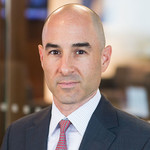